Before the sixteenth century most Western Christians thought of the church as divided into three parts. First there was the church triumphant, consisting of the saints, the holy souls, who had already arrived at the beatific vision of God. Officially they were still awaiting the final resurrection, but increasingly that wasn’t emphasized, and in many medieval portrayals it has dropped out altogether. Think of Dante and the medieval mystery plays. There was such a place as heaven; some souls had already made it there, and they were therefore to be thought of as saints; they were in the presence of God; what more could they want? 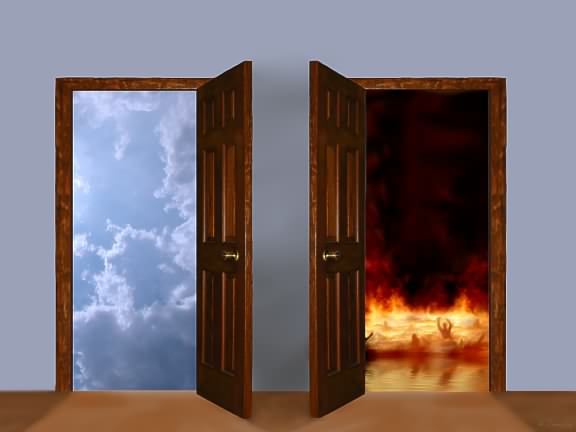 The issues of purgatory and hell can be quite controversial.  We dig into the various ideas on each of these topics in this episode of Adventures in Grace.

What was Jesus talking about when he talked about hell? Well, that’s actually a great question.

Growing up I was often told that “Jesus talked more about hell than he did heaven”, but I don’t once remember being encouraged to actually research from a historical and grammatical perspective what Jesus was actually talking about when he used the word “hell”. (In their defense, I don’t think I ever had a religious leader with advanced theological training, so they probably didn’t realize that someone might want to “look this up” either).

The first discovery one will make on such an investigation, is the inconvenient truth that the word “hell” didn’t exist in first century Israel. This brings up one crucial problem when translating/interpreting the Bible apart from any scholastic work: we see English words that have specific linguistic and cultural connotations and meanings, and read those meanings into an ancient text which may, or may not, have intended to send the same meaning.

The word “hell” becomes a prime example: the word we use today, doesn’t actually appear in language until approximately AD 725– long after the first century. In addition, the word doesn’t come from Hebrew at all, but rather is ultimately rooted in Proto-Germanic. According to the The Barnhart Concise Dictionary of Etymology, the word “hell” was adopted into our vocabulary as a way to introduce the pagan concept of hell into Christian theology– which it did quite successfully.

Therefore, we know right off the bat that when we read scripture in English, we’re not actually reading what was originally said and risk reading into the text instead of getting back to the original historical and grammatical meaning of the text. We do this in many areas, which is why competency in Biblical languages or at least Koine Greek, is a mandatory requirement at legitimate institutions of higher theological learning– and why one would do well to hold theology in humility until they are well versed in the grammatical and historical realities of any given ancient text.

It is true however, that we do see– and not infrequently– Jesus refer to “hell”. So what was he talking about?

It’s easy to dismiss something in scripture as just being “metaphorical” without having an intelligent reason to back that up, so we’ve got to go deeper. In this case, we find that Jesus was actually referring to a literal place– and not a literal place of the future, but a literal place of first century Israel. “Hell” was a place that the people of Jesus’ time could actually go and see (image below). So, what was it? Here you go:

The word Jesus uses in Greek is γέεννα (Gehenna), which actually means “The Valley of the Son of Hinnom”. An over simplified description of Gehenna would be that it was the garbage dump outside of Jerusalem; this was the place where both garbage and dead bodies would be discarded and consumed by a fire that was likely always burning. The location goes all the way back to the book of Joshua, and was a place where bad things happened– child sacrifice, bodies were cremated, etc. Basically, imagine a dump where garbage is burned– add into that the vision of burning bodies and a historical connotation of child sacrifice, and you’ll see that it wasn’t a very desirable place. However, it was a very literalplace and the original audience of Jesus would have understood it as such. They would not have heard the word “Gahenna” and thought of our concept of hell– they would have realized Jesus was talking about an actual place outside the city.

Jesus did talk of Gehenna as a warning to his audience, but not in the same contextual framework you and I see it from a modern perspective. As my friend and co-Kingdom Conspirator Kurt Willems previously wrote on this same topic:

“When Jesus appeals to Gehenna, he evokes a literal place, not in the underworld, but outside of Jerusalem. Most of the time Jesus uses “hell” in the context of parabolic imagery. To say “hell” is to use imagery that helps listeners understand the danger in this life and the next of not joining up with God’s kingdom purposes.”

As Kurt said, I think the warning of Gehenna is two-fold, one with a very practical application for his audience and one that is symbolic of consequences in the afterlife. For example, it Matthew 23:33 we see Jesus issue the religious leaders a stern warning:

“You are nothing but snakes and the children of snakes! How can you escape going to Gehenna?”

Now, going back to our historical context, we know that the original audience who heard this warning would not have thought Jesus was talking about the “hell” that you or I think of. Instead, he is warning them about their pending risk to literally be burned in the Valley of Hinnom.

Here’s what they would have heard: “You are nothing but snakes and the children of snakes! How will you escape going to the Valley of Hinnom?”

When we look at historical context, we remember that Jesus clearly warned people about the coming judgement against Israel. At the beginning of Matthew 24 Jesus explicitly sets the stage for the coming destruction, warning them that even the temple will be destroyed (“not one stone will remain on another, it will all be thrown down.” V. 2) Jesus goes so far as to even tell them what the signs of the coming judgment (the end of the “age”) would look like: wars, rumors of wars, famine, earthquakes, etc. As Jesus describes this “great tribulation” with horrible persecution, he advises them that if they want to escape death at the hands of the Romans, they would need to flee to the hillsides when they see the “signs of the times” (verse 16).

This actual event and the fulfillment of Jesus’ warning came in AD70 when Roman armies destroyed Jerusalem along with her temple. Presumably, those who heeded Jesus’ warning in Matthew 24 of fleeing to the hillside would have survived the advancing destruction of the Roman army… but those who didn’t?

Well, those folks were killed. And guess what we know actually happened to their bodies? They were burned in… “hell”, just outside of Jerusalem– exactly as Jesus had warned. This makes the teachings of Jesus very practical when considering the historical and grammatical context: those who listened to him would live, and those who didn’t would end up burned in the Valley of Hinnom. While we don’t know for sure, it is highly likely that some/many of the people in the audience when Jesus warned “how will you escape going to the Valley of Hinnom?” actually ended up dead and burned in Gehenna by the Romans.

You probably didn’t hear any of this in Sunday School, but that’s what Jesus was talking about when he talked about hell, at least on a historical level (not accounting for symbolism or dual fulfillment). However, I still affirm that his warnings of hell also have implications for the afterlife– which is why I remain an annihilationist with the hope there will be opportunities for the unjust to come to postmortem repentance, and be reconciled to God through Christ.

All things considered, I believe it important to realize that when Jesus discusses hell, a primary purpose (not negating secondary) was a warning of the coming destruction of Jerusalem and that refusal to heed his advice would result in one being killed and burned in Gehenna.

In this episode I mentioned several resources, including:

Note: The first link below is for the book, and the 2nd link is for the DVD.

If you have an idea for a podcast you would like to see or a question about an upcoming episode, e-mail me.  Also, feel free to leave me a voicemail as well by clicking the tab on the middle right of your screen.

If you enjoyed the show, please rate it on iTunes and write a brief review. That would help tremendously in getting the word out! Thanks.

Question: Have questions about heaven or life after death?  Or topics you would like to hear me cover?  You can leave a comment below, or leave me a voicemail by clicking on the link to the right.

Please note: I reserve the right to delete comments that are offensive or off-topic.